Craig Boddington takes a look five great military Rifle Cartridges, all more than a century old, that continue to solider on.

Military Rifle Cartridges tend to remain in service for extended periods because it takes much treasure for nations to gear up for a new Rifle Cartridges. Some warhorses stay in harness purely on merit. The .50 BMG, for example, has been a world-standard heavy machine gun cartridge for a century, and these days it has been repurposed into military and civilian long-range shooting.

Other military Rifle Cartridges remain in the harness on somewhat less merit. In 1886 the French 8×50 Lebel was the first smokeless-powder military cartridge, and a few years later it was loaded with the world’s first spitzer boattail. Its ballistics were anemic even at the turn of the century, though, so it stayed in service for 50 years but not on merit—although it was widely used throughout Central and West Africa on game up to elephant.

Some old military Rifle Cartridges bridged the gap from long military service to worldwide sporting use. I decided that a full century of use would be the minimum for inclusion on this list, which ruled out such great and popular cartridges like the 7.62×39, 7.62×51/.308 Win. and 5.56 NATO/.223 Rem.

So here is my list of five great old warhorses that not only survived but also still have worldwide impact. I’ll take them in order of introduction.

The .45-70 (1873) is the cartridge that really won the West. Although officially in service only 19 years, it was widely used in the Spanish-American War in 1898. By then it had long been America’s standard choice for larger game, and amazingly, it remains popular today.

Then and now, the .45-70 is the most common cartridge in big single-shot actions. John Marlin’s Model 1881 lever action was the first repeating action large enough to house the .45-70, followed by the Winchester Model 1886 and the Marlin 1895.

Today it’s still chambered to “vintage” single-shots like the Remington rolling block and Sharps and Winchester High Walls, but its greatest current popularity is probably in big lever actions—including reintroductions of the Winchester ’86 and the current 1895 Marlin. 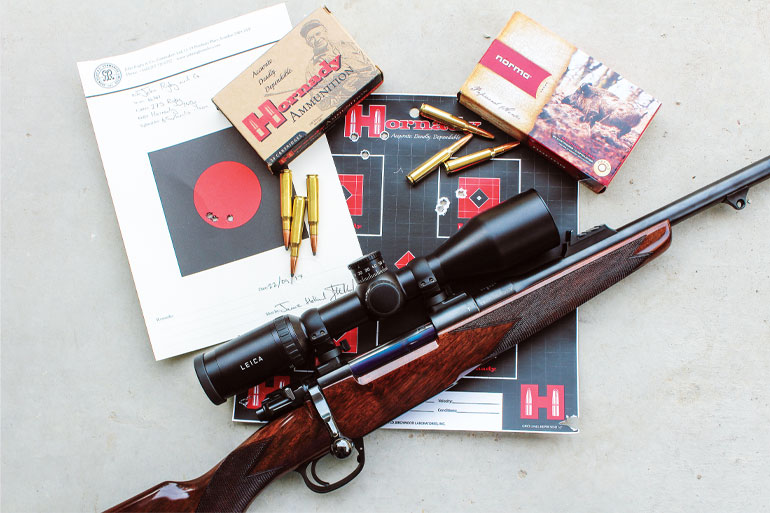 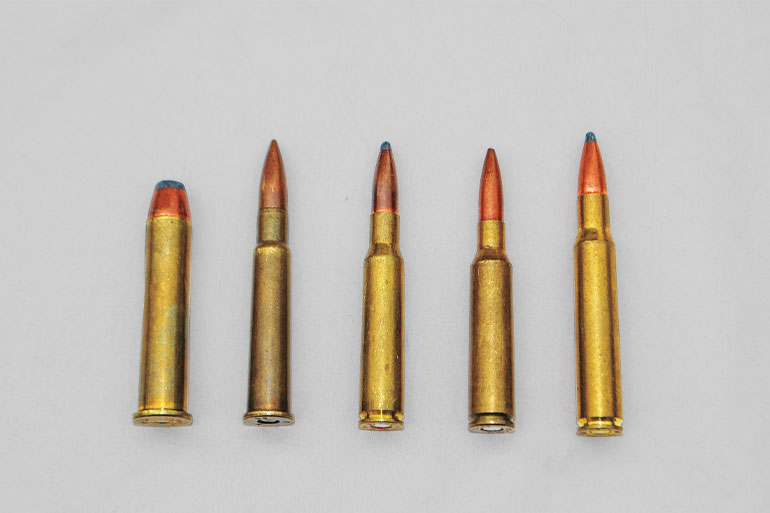 Unlike most of my selections, the .45-70 is primarily an American phenomenon, rarely seen elsewhere, although I’ve encountered a few European double rifles in .45-70. In a tricked-up “guide gun” with modern sights and finishes, the .45-70 is as modern as tomorrow—and still highly effective.

All .45-70 factory loads from major manufacturers are mild out of concern that they might be used in the weak trapdoor Springfield action. Even so, the .45-70 is adequate for short-range use on all North American big game.

Modern lever actions and most single-shots are strong enough to handle heavier loads, which take the .45-70 into a different class. Handload recipes are legion, and several smaller ammo companies, including Buffalo Bore and Garrett, supply .45-70 ammunition graded by recommended actions. With heavy loads and proper bullets, the .45-70 is adequate for game up to Cape buffalo. The .45-70 Gov’t has come a long way since the Little Big Horn.

I was on the fence on the great .303 (1888). It’s definitely out to pasture in current firearms, but the .303 must be one of the most significant cartridges of all time. It had one of the longest runs as standard military issue: a whopping 69 years.

Uniquely, it was introduced in 1888 with a compressed blackpowder load and converted to Cordite in 1892. The .303 (0.311-inch bullet) served Great Britain well through both world wars and innumerable colonial disputes, and it’s still frequently encountered wherever the Union Jack flew.

Its rimmed case was adapted to few civilian bolt actions, but there are plenty of Lee-Enfields still in use around the world. I carried a “jungle carbine” Enfield on an Alaskan moose hunt years ago, and I recently used a World War I Short Magazine Lee Enfield on a roebuck hunt in England.

The most common loads today are 150 or 180 grains, which are effective for deer, elk and even moose. However, the .303 made its bones with a heavy-for-caliber 215-grain bullet, used throughout the Empire for large game because the .303 is what many British explorers, soldiers and settlers had. Walter Bell, while famous for the 7×57 Mauser, probably took more elephants with the .303.

It has been chambered to many single-shots, most recently a run of Ruger’s No. 1, and is seen in some double rifles. My late friend Joe Bishop had a Holland Royal double in .303, probably the only rifle in Joe’s collection I actively coveted.

In the late 19th century, the development of smokeless military Rifle Cartridges was frantic. A half-dozen 6.5mm cartridges, a dozen 8mm cartridges and several more “in between” metric military Rifle Cartridges were adopted by various countries between 1886 and 1905. Only one was a pure 7mm using a 0.284-inch bullet: the 7mm Mauser (1892), adopted by Spain in the improved 1893 Mauser rifle.

The 7×57 was ultimately adopted by 18 countries. Fearing British aggression, President Martinus Steyn of the Orange Free State and President Paul Kruger of the Transvaal Republic secured huge quantities of the new 1895 Mauser and 7×57 ammunition. So in the Second Boer War (1898–1902) the Brits with .303s faced the Boer 7×57 Mausers. Also in 1898, American troops with Krags faced Spaniards armed with 7×57 Mausers.

The “Boer Mauser” may not have been superior to the 10-shot Lee-Enfield, but it’s certain the Boer farmers outshot the Brits. It’s clearer that the clip-loading Spanish Mausers proved superior to the Krag. Both Americans and British came out of the conflicts with lasting respect for the 7×57 Mauser, which quickly became a popular sporting cartridge worldwide.

With its heavy-for-caliber, 173-grain solid, the 7×57 Mauser was used by some—including, of course, Walter Bell—for game up to elephant. In England, John Rigby renamed it the .275 Rigby, offering a fast 140-grain load, greatly increasing its versatility.

Although never as popular here as across the pond, the 7×57 gained and has kept an American following. Best known for championing the .270 Win., Jack O’Connor was also a lifelong fan of the 7×57, using it—and not a .270—for the majority of his desert sheep.

Modern factory loads are mild out of concern for use in older rifles. With good handloads, the 7×57 can exceed the 7mm-08 Rem. and performs better with heavier bullets, but common 7mm-08 factory loads are faster. And the 7mm-08 can be housed in a shorter action. This has hurt the 7×57’s popularity, but it still retains a loyal following, and there are a few new modern rifles chambered for it.

The 7×57 has history, nostalgia and romance, and it’s probably more popular than the 7mm-08 in custom rifles. I can’t argue with Karamoja Bell, but I don’t see it as an elephant cartridge. However, it is extremely effective on game up to and including elk, with mild recoil and awesome performance.

The several early 6.5mm military Rifle Cartridges used heavy-for-caliber bullets, from 156 to 160 grains. Although velocities were mediocre, penetration was astonishing, and late Victorian hunters waxed euphoric. The 6.5x53R Mannlicher (1892) caused most of the stir, but the 6.5×54 Mannlicher-Schoenauer (1900) was also a popular sporting cartridge.

Both were controversial because, like the 7×57, outspoken hunters used these early 6.5mm cartridges for game up to elephant. The 6.5×55 (1894) stayed a bit above the fray because, as the military Rifle Cartridges of both Sweden and Norway, it was quickly adopted by Scandinavian moose hunters and not so much by elephant hunters.

Over time, the other early 6.5mms dropped by the wayside, but the 6.5×55 has retained a worldwide following. It remains common throughout Europe and is still a staple for Scandinavian hunters. In the United States, it’s a Rifle Cartridge that has come and gone in popularity. But it keeps coming back.

As with the 7×57, factory loads are purposefully mild. This is unfortunate because, on paper, it doesn’t look as good as the .260 Rem. or 6.5 Creedmoor—although, truthfully, the three are ballistically identical. The 6.5×55 has the greatest case capacity so with good handloads in a modern action it can outrun the others. Its only drawback is that it’s too long to be housed in a short action. But in real terms, there is nothing the 6.5 Creedmoor can do that the 6.5×55 cannot do.

The 6.5×55 is unlikely to become more popular, but it’s hardly a rare cartridge. With common bullets of about 140 grains, it’s an awesome cartridge for deer-size game and is adequate for elk. With heavy bullets it’s more effective on larger game. And because it requires a .30-06-length action, it is better suited to heavy bullets than are the short-action 6.5s.

Although I’ve used 6.5x55s here and there, I’ve never owned one. Getting my hands on a good 6.5×55 in some sort of left-hand action is now a bucket list gun.

The 1903 Springfield was introduced with a rimless cartridge firing a 220-grain round-nose bullet. In 1906 we changed to a 150-grain spitzer, at the same time shortening the case neck 0.07 inch. The “.30-03” cartridges continued to be loaded commercially for years. Sounds confusing, but .30-06 cartridges could be safely fired in rifles for either version, but the older .30-03 cartridges with the longer neck shouldn’t chamber in .30-06 rifles.

I’ve held the famous sporterized Springfield rifle that Theodore Roosevelt used on his epic 1909 safari. To some degree, it was the Roosevelt safari that started the legend of the .30-06 as a great hunting cartridge.

According to the curators at the Springfield Armory Museum, Roosevelt’s rifle was never modified, so it was really a .30-03 and never a .30-06.

It really doesn’t matter. The Roosevelts used 220-grain roundnose bullets with open sights, and for sure it was the heavy-for-caliber 220-grain bullet that made the .30-06’s reputation as a hunting cartridge.

Later, in France, the .30-06 would have more serious business. Although there were multiple changes in bullets and loads—and the shift from Springfield to Garand—the .30-06 remained America’s service cartridge for 51 years, through both world wars, Korea and the banana wars in between.

To call it a success as a warhorse would be a gross understatement. As a hunting cartridge, it took time. Lever actions were dominant until after World War I, and bolt-action sporters were uncommon. In the 1920s bolt actions became more available, and commercial sporters, such as Remington’s M30 and Winchester’s M54, joined World War I surplus and the .30-06 took over. America holds the world’s largest hunting market, with room for many cartridges to be successful, but despite so many great choices, the .30-06 reigned as America’s premier hunting cartridge for decades.

The .30-06 remains one of the top sellers today, although the sands of time have revealed chinks in its armor. The .30-06 is needlessly powerful and has more recoil than necessary for deer-size game. It works, you bet, but it’s a better elk than deer cartridge, and I think this has much to do with the current ascendancy of the 6.5 Creedmoor.

Still, the ’06 has remained popular in spite of so many brave new magnums. By any measure, the .30-06 is fast, flat-shooting and powerful. With new loads and increasingly aerodynamic bullets, it is faster and flatter-shooting than ever—and still powerful.

The .30-06 is one of the most versatile of all hunting cartridges, acceptable for all North American big game and useful for just about any non-dangerous game anywhere in the world. More brave and bold cartridges will come along, but I won’t live to see the .30-06 put out to pasture—and neither will you.