With the right bullets and powders, reloading 45 ACP can yield ammo more than capable of winning matches and protecting the home.

Not many cartridges have lived as long as the Reloading 45 ACP. In fact, not many of anything has. Adopted by the U.S. military in the Model 1911 pistol during the year 1911, the grand old soldier marches on while dozens of modern-day wonders introduced since are now pushing up daisies.

And while the pistol mostly served its decades of military duty in the hands of ground troops, early on it served in the air as well. Until Harry Kauper invented an interrupter cam capable of synchronizing the firing of a machine gun so each of its bullets traveled between the propeller blades of aircraft, American aviators of World War I plinked at German fighters with various rifles and handguns, and the 1911 pistol with an extended magazine was one of the more popular. A small wire cage attached to the grip of the pistol and covering its ejection port collected spent cases to avoid possible damage to the fragile canvas skin of the pilot’s biplane.

The 45 ACP just loves to be handloaded, and doing so is falling-off-a-log easy. There are about three jillion different powders and bullets for it, and unprimed cases of excellent quality are available from several sources, including those from Starline and Hornady that I used in building handloads for this report. When trying a new load, I use a single-stage press and throw powders with a Redding Competition 10X measure, which is renowned for minimal charge-to-charge variation. For high-volume shooting, I switch to a Dillon progressive loader. There is nothing wrong with cleaning primer pockets, but the wonderful Dillon machine has convinced me that accurate ammo can be produced without doing so.

It was proven long ago that the 45 ACP can be an extremely accurate cartridge, and some shooters go to extremes in squeezing the tiniest groups from it. The cartridge headspaces on the mouth of its case, and only slight variations in case length can cause variations in the energy delivered to primers by the firing pin. That can increase velocity spread enough to increase group size, but it takes a pistol capable of consistently shooting inside 2.5 inches at 50 yards to reveal any effect on accuracy. It is not uncommon for a serious Bullseye shooter to trim cases to a consistent length, and while previously fired cases are used at 25 yards, some shoot only virgin brass at 50 yards.

Those who consider cast lead-alloy bullets second-rate in accuracy are obviously unaware that Bullseye competitors have long been using them in loads capable of consistently averaging less than 2 inches at 50 yards from a Ransom Rest. Many shoot a 175-grain SWC at 25 yards and then switch to a 200-grain SWC at slightly higher velocity for the 50-yard event. Muzzle velocities seldom exceed 850 fps, with some competitors preferring a velocity as low as 650 fps for 25-yard targets. Actual barrel groove diameters of barrels can vary a bit, and to ensure 100-percent obturation at relatively low chamber pressures in a slightly oversized barrel, some competitors prefer fairly soft bullets with a hardness in the 12 BHN (Brinell Hardness Number) range. Some continue to stick with cast bullets, while others shoot jacketed bullets, with the Nosler 185-grain Custom Competition HP probably the most popular among top-ranked shooters. Some shoot cast bullets at 25 yards and switch to jacketed bullets for 50-yard targets.

Most IPSC/USPSA competitors now shoot the 40 S&W in Limited Class, and while guns chambered for it do have a capacity advantage, I never shot it as well as the 45 ACP, and I was shooting identical custom guns chambered for the two cartridges. In that game, bullets have to be loaded to higher velocities than for Bullseye in order to make the required power factor, and slightly harder bullets are needed to avoid barrel leading. I shot 200-grain SWC bullets from Bull-X (no longer in business), and back then the minimum power factor was 175 (now it’s 165). To ensure my 45 ACP loads would qualify on chronographs used by the various clubs on the competition circuit, I hedged my bet by loading the 200-grain bullet to a power factor of 180, which required a velocity of 900 fps.

Barrel leading was never a big problem because the hardness of the bullets I used checked out at a consistent 15 BHN or a bit higher. I mention this because commercial casters, such as Rim Rock Bullets and Missouri Bullet Co. featured in this report, offer bullets in various hardness ranges. The 200-grain SWC bullets from Missouri Bullet Co. were 12 BHN and 18 BHN. IPSC does not require the same level of accuracy as Bullseye, but the Long Range Standards course of fire at major matches is at 50 yards, and since the “A” zone of the target is only 6 inches wide, the guns and loads I used were capable of keeping bullets inside 3 inches at that distance. Back on the subject of barrel leading, anyone who shoots a lot of cast bullets and does not have a Lewis Lead Remover kit from Brownells is missing the boat. 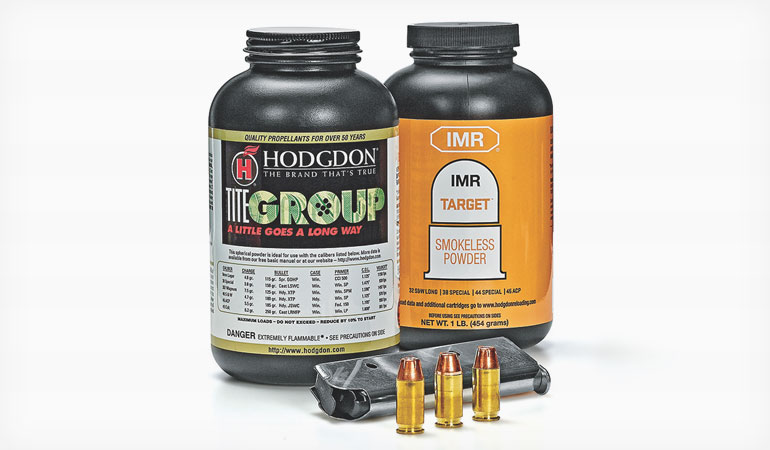 Polymer-coated lead-alloy bullets have been with us for a very long time, and the recent introduction by Federal of its Syntech ammo has gotten a lot of attention from shooters. Two things should be remembered. They should not be pushed to higher velocities than uncoated hard-cast bullets, and the application of excessive taper crimp can rupture the coating and cause it to flake off. In my experience, when both are of equal quality, the plain cast bullet has a slight accuracy edge, but it usually takes an extremely accurate pistol to reveal the difference. When both bullets move out at reasonable velocities, neither leaves a lot of fouling behind in a top-quality barrel, while both will eventually leave streaks of lead in a rough bore. The biggest advantage the poly-coated bullet offers is it produces very little smoke, and that can be quite important when shooting on an indoor range.

Swaged bullets are available from Speer and Hornady, and they are quite soft. Some barrels will handle them at higher velocities, but in my experience, they are best suited for speeds below 800 fps. If leading becomes a problem at that velocity, try coating the bullets with a mix consisting of three parts Lee Liquid Alox and one part mineral spirits. Follow Lee’s application directions printed on the container except allow the bullets to dry for three days rather than just overnight. I have not shot a lot of the Speer bullets, but I have shot quite a few from Hornady, and due to their dry-lube coating, they produce no more smoke than poly-coated bullets.

I enjoy casting bullets, and a Lyman Mag 20 electric furnace and Lyman four-cavity molds speed up production. Bullets are sized and lubricated in Lyman 4500 and RCBS Lube-a-Matic machines. A 0.451-inch sizing die is perfect for most barrels, while a slightly oversized groove diameter may deliver better accuracy with 0.452 inch. This assumes chamber diameter is large enough to handle it. Bullets cast of scrap wheelweight metal cost me less than a penny each and usually average around 10 BHN. The old faithful Lyman No. 2 recipe, consisting of 90 percent lead, 5 percent tin, and 5 percent antimony, is usually quite close to 15 BHN. Good barrels will handle bullets as fast as they can be safely pushed from the 45 ACP so long as hardness is 10 BHN or higher.

Barrel groove diameters are known to range up to 0.453 inch, which is considerably larger than the common 0.451/0.452 inch of cast bullets. If a gun is not performing with a hard bullet of that diameter, switching to a bullet in the 12 BHN range will often tighten groups considerably. A bullet that soft will obturate to fill the grooves of an oversized barrel, even when pushed along at a leisurely 750 to 850 fps. Higher velocities require harder bullets, which is why some commercial casters offer bullets with hardness ratings ranging from 12 to 18 BHN. The Rim Rock bullets featured in this report checked out at 15 BHN and were quite accurate at all velocities.

Unless you are shooting a Bullseye gun at 50 yards, don’t become obsessed with casting perfect bullets. As long as bases are uniform and fully formed, a few shallow wrinkles elsewhere do not affect accuracy enough to matter. Use a good lube like Lyman Alox, apply just enough taper crimp to prevent bullets from being pushed deeper into the case as cartridges move through an autoloading pistol, and your handloads should deliver all the accuracy the typical off-the-shelf handgun is capable of.

A Plethora of Proper Powders

Variations in case tension on seated bullets can result in wide velocity spreads, but it often takes an extremely accurate pistol to indicate the difference on paper. You can feel the difference when full-length resizing virgin brass. If the expander plug goes in exceptionally hard and withdraws hard, that case goes in a separate batch with others of its kind.

Keep headstamps separated, and while cases that have been subjected to many firings will continue to deliver a level of accuracy good enough to keep most shooters and their guns happy, a top-quality match gun will usually shoot its best groups with either virgin cases or cases that have been fired only two or three times.

All the 1911 pistols used for accuracy testing in this project were match grade, and they were fired from a Ransom Rest. The Les Baer Custom Premier II even came with a 10-shot accuracy guarantee of 1.5 inches at 50 yards. When shooting four, five-shot groups with each load, using a pair of 10-round magazines from Brownells with the single-stack guns saved quite a bit of time. All ammunition was loaded with Hornady dies and a RCBS Rockchucker press.

I would like to close with my pick of the best powder for 45 ACP handloads, but so many work so well in this wonderful old cartridge doing so is impossible. Top choices include Hodgdon Longshot, CFE Pistol, Universal, Titegroup, Clays, and Titewad; IMR Target and Red; and Winchester 572, AutoComp, WSF, 244, 231, and WST. You can add HS-6, HP-38, and Titewad to the list. If there is a bad 45 ACP powder out there, I have yet to discover it.

As Layne stated in the main article, 16 powders work very well in the 45 ACP cartridge; however, I have to disagree with his assessment that so many powders work so well that you cannot choose a favorite. My favorites are Hodgdon Titegroup and IMR Target for light competition loads and Hodgdon CFE Pistol and Winchester AutoComp for heavy competition and defense loads.