Federal Syntech Defense and Training Match offerings allow you to shoot with confidence.

If you find a winning formula, you stick with it, which is exactly what Federal Syntech Defense has done with the Syntech line of polymer-­jacketed bullets and loads. After striking gold with the original red-bullet Syntech ammunition, Federal has expanded the line to include Syntech Defense, which features a blue bullet, and Training Match, with a purple bullet, each of which fits a specific need for shooters.

Federal’s Training Match was designed to deliver the same velocity, trajectory and point of impact as Federal’s HST defense load, providing law enforcement officers and other shooters with a cheaper training round to maximize time at the range. The high-­visibility purple was chosen to distinguish it from duty loads and to make it easier to visually ensure magazines were fully loaded.

“The Training Match round first came about because we saw a need for it within the law enforcement community,” said Jared Hinton, communications coordinator at Federal. “Not only does it achieve the same velocity and point of impact, it also provides a cost-­effective training round that extends the time between cleaning the firearm by reducing fouling and ensuring the air quality at indoor ranges is cleaner.”

Accuracy testing was conducted with the 147-­grain Training Match load in 9mm, fired from the CZ P-­10C with open sights at 25 yards from a bench and sandbag rest. Five five-­shot groups were measured with a digital caliper, while velocity was measured with a Competition Electronics chronograph. Average velocity was 992 feet per second (fps), with a standard deviation of just 7 fps. Average group sizes measured 2.45 inches, while the best group came in at 1.72 inches.

In the personal-defense category, Federal’s Syntech Defense features a 138-­grain polymer-­jacketed bullet with a solid core that penetrates between 12 and 18 inches, while three segments break off almost immediately to create wound trauma roughly 6 inches deep. The projectile is designed to perform in clothing and gel but not barriers. As a result, it’s ideal for cost-­effective personal defense.

Like all Syntech loads, Defense rounds are designed to reduce barrel fouling and utilize a Catalyst, lead-­free primer. At the range, Syntech Defense produced a best group of 1.75 inches at 25 yards, with an average group of 2.17 inches. Velocities were extremely consistent, with a standard deviation of 7 fps. There were no feeding or function issues through the P-­10C.

Hinton said the push for a polymer-­jacketed defense load came from the industry advancements in the bullet realm. Part of that demand is for cleaner technology, while the other part is for newer, cutting-­edge bullet designs. 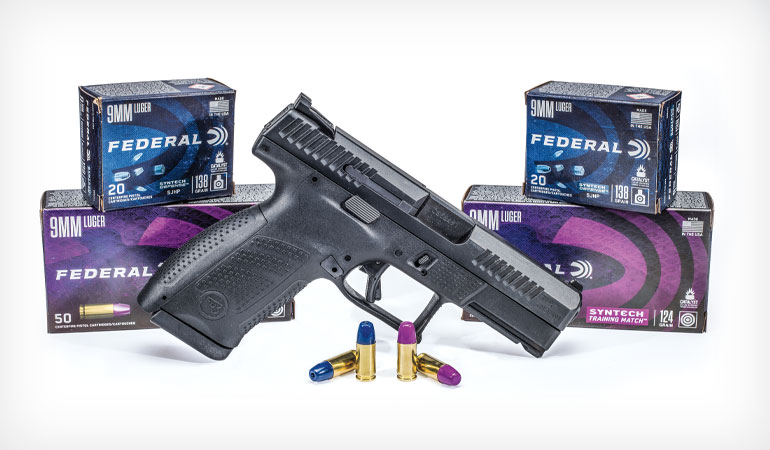 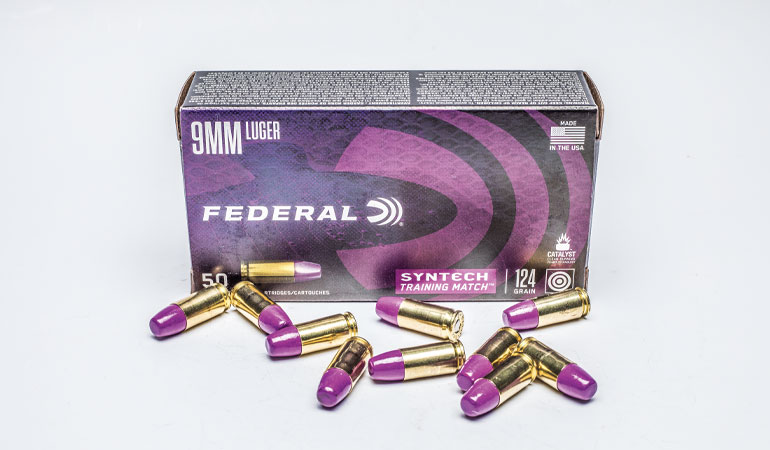 “We had a lot of demand to come up with our own next-­gen bullet technology,” Hinton said. “Our engineers looked at the CCI .22LR ammunition and began developing a concept for the segmenting polymer defense bullet. The Syntech Defense is the result of that.”

The Syntech Defense load has demonstrated reliability in gel, and as we found, was consistently accurate at the range. The same can be said about the accuracy of Syntech Training Match. Whether you’re looking for a cost-­effective, cleaner way to train or defend yourself, Federal’s newest Syntech offerings allow you to shoot with confidence.