There was a time when groups measuring three to four inches at 100 yards from a 30-30 Load Data lever-action rifle of tube-feed, exposed-hammer design were quite acceptable. Those days are long gone. Today’s ammunition is much more accurate, mainly because today’s bullets are more accurate.

Lever-action rifles are also more accurate, and this especially holds true for those made by Marlin. Nowadays it comes as no surprise to see a Model 336 in .30-30, .444 Marlin, .45-70, .308 Marlin Express or .338 Marlin Express consistently shoot three bullets inside two inches at 100 yards. Some rifles will crowd an inch rather closely. Marlin has proven that today’s lever-action rifle can be as accurate as most bolt actions.

The brightest star among lever-action cartridges has always been the .30-30 Winchester, and while it celebrated its 115th birthday in 2010, it has not been ignored by the wheels of progress.

Originally loaded with a 160-grain bullet at 1,970 fps, claimed factory load velocities gradually increased through the decades to today’s respective speeds of 2,390 and 2,200 fps for 150- and 170-grain bullets. But we all know that real-world bullet speeds in 20-inch barrels are usually 100 to 150 fps shy of that.

Not long back, Hornady upped the ante a bit more by introducing its LeverEvolution load with a 160-grain, tube magazine-friendly, pointed bullet at 2,400 fps, and while it falls shy of that in some rifles, at its worst it is still 75 to 100 fps faster than 150-grain factory loads and close to 200 fps faster than 170-grain loads.

Now comes the availability of LeverEvolution powder from Hodgdon, and .30-30 velocities unapproachable in the past are within easy reach of those of us who take great joy in stuffing primers, powders and bullets into second-hand cases.

A spherical-grained propellant, it is manufactured by the St. Marks Powder Company in St. Marks, Florida, and it is the powder loaded by Hornady in LeverEvolution factory ammunition. 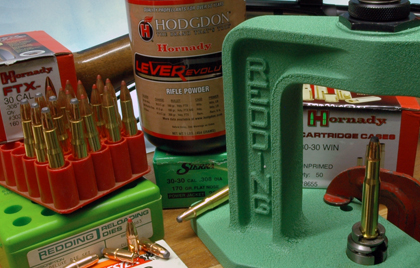 Handloads using LeverEvolution powder are capable of boosting .30-30 velocities upward of 200 fps beyond factory loads available from Remington, Winchester and Federal and close to 100 fps faster than can be reached by the handloader with any other available powder.

Hodgdon’s recommended maximum load with LeverEvolution powder and the Hornady 160-grain FTX bullet was 111 fps faster than Hornady’s LeverEvolution factory load, but in order to duplicate its accuracy in the Marlin, I had to decrease the maximum powder charge by 1.5 grains, which pretty much duplicates its velocity as well.

Since the heavier 35.5-grain charge of LeverEvolution averaged 1.5 inches in my Winchester Model 54, I am thinking a maximum charge exceeds the velocity range at which the Micro-Groove barrel of the Marlin rifle is capable of delivering its best accuracy with the pointed Hornady bullet and its relatively small bearing-surface area.

The velocity race does become a bit closer when handloads using LeverEvolution and the old traditional powders such as IMR-4895 and H335 are compared. Maximum (but safe) charges of LeverEvolution can easily push 150- and 170-grain bullets from a 20-inch barrel at respective velocities of 2,425 and 2,300 fps while around 2,300 and 2,100 fps are about the highest speeds I can usually squeeze from IMR-4895 with those bullet weights.

Another great thing about LeverEvolution is that accuracy is as good as with it as any powder I have tried in the .30-30. Take special note of the accuracy of the Sierra 170-grain bullet in my rifle.

When buying a supply of Hornady’s 160-grain FTX bullets for loading in the .30-30, keep in mind that even though the same type of bullet loaded by Hornady in the .308 Marlin Express weighs the same, its cannelure is located farther back; if that bullet is seated with its cannelure at the mouth of the .30-30 case, overall cartridge length will be too great for lever-action rifles.

In addition, due to a longer ogive taper on the Express version of the bullet, the mouth of the .30-30 case would rest beyond its full-diameter shank when it is loaded to the recommended overall cartridge length of 2.535 inches. Hornady’s catalog numbers are 30395 for the .30-30 bullet and 30396 for the .308 Express bullet.